MOUNTAIN VIEW, CA – It seems as though Google has taken its next step towards its transportation dreams. In a move that would rival Uber and Lyft, Google has reportedly filed a patent application to develop pick-up and drop-off locations for autonomous vehicles.

This latest announcement comes in a string of robotic transportation news for Google and its parent company, Alphabet. As we’ve previously reported, it looks as though Google and its parent are making continual moves to secure their status as a robo-vehicular leader with its plans to launch a self-driving truck venture, and ride-sharing service.

Patent Yogi reported that the patent would enable Google for better efficiencies for its impending service. According to the patent, users would provide initial information–such as their pick-up and destination locations–which the self-driving vehicle would then use to arrive at the locations. 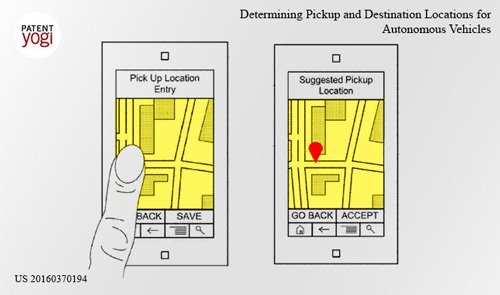 The tech would also respond to challenges inherent with a self-driving shuttle service; such as unforeseen road conditions, emergency services activity, speed limits, and more. Additionally, Google would use its Maps technology to implement real-time traffic conditions, and provide better pick-up and drop-off locations through a centralized dispatching system if the initial locations were unreachable by the self-driving cars.

In a sea of many tech and transportation companies looking to lead the autonomous vehicle race, Google’s patent stated that this technology would increase “availability, safety, and usefulness of the services of autonomous vehicles,” according to The Verge.

If secured, will this patent and technology set the stage for more freight-minded autonomous vehicles? AndNowUKnow will continue to report as the news rolls in.