MILTON, NY - Harold Albinder, CEO and President of Hudson River Fruit Distributers, stands before an apple orchard in fruit. He leans against the flats of apples behind him and smiles to the camera, his eyes crinkling behind his dark, square glasses. At 76, Harold is cheerful and relaxed; he exudes a sense of sage certainty.

Though Harold first partnered with his father in 1963, purchased Hudson River Farm Distributers in 1964—planting 7,500 trees—and bought his first farm in in 1967, the sweep of new blooms in spring and the anticipation of the crop to come still excite him. Harold’s son and granddaughter now work with him as third and fourth generation apple farmers.

“I think apple growing [has] probably been my thing that I love the most,” Harold continues. 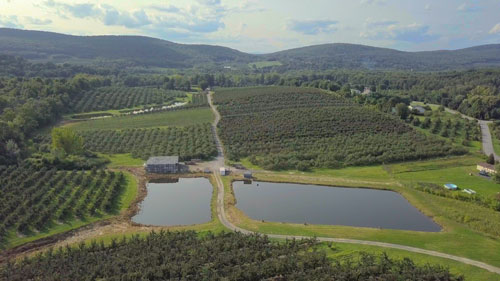 But, Harold’s apple farm dream was not just a romantic vision of apple blossoms and orchards fringed by soft green grass; his was the practical American-dream: “I told my dad that—at the time—that we had to get something for ourselves: some, you know, roof over our head.”

Though Harold may not have started with one tree, a rake, and a shovel; he has worked his way up from the 7,500 trees in 1964, trees which are still producing.

“May is when the flowers come out, when the blossoms come out. Every year I get really charged up, enthused, about the coming crop,” Harold explains, walking down a row of trees, boughs bending, heavy with pink fruit. “You’re always going to have a better crop than the year before. You’re laden with apples. Beautiful!”

Harold is not only enthralled by the beauty of the orchards, great expanses of green and pink under bright blue skies, but recognizes the hard work and dedication one must, and he has, put into their land to have a successful farm: “I remind everybody that the best fertilizer a farmer can put on his land is his shadow.”

“That’s what nature gives. That’s about it. That’s my story. Thank you. Have a good day. Eat a lot of apples,” Harold finishes, leaning back against the flat of apples.

Over the past 50 years, Hudson River Fruit Distributors has built its reputation in the industry as a dependable, quality...