LEAMINGTON, ONTARIO – As The Greenhouse Vegetable Competition came to a close over the weekend, NatureFresh Farms™ has announced the company has secured top recognition and been awarded in four popular categories for its tomato and bell pepper varieties, including the People’s Choice Award for Hottest Tomato.

“We are very pleased to have won these top awards for our tomatoes and bell peppers,” said Peter Quiring, Owner & President. “Our employees take great pride in growing the best vegetables we can and when you receive awards like this, especially the People’s Choice Award, you know you are doing good things.” 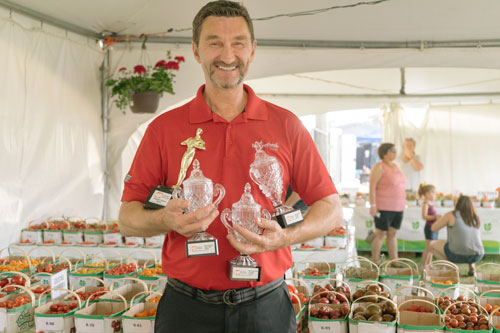 Consumers taste and judge the hundreds of different types of vegetables to vote for the best entries in each category under a secret ballot. The entry with the highest number of public votes through Friday and Saturday wins the title of People’s Choice Award. The company stated in a press release that consumers get a true blind taste test in order to select the best varieties.

The yearly event, held at the Leamington Fair each June, allows for greenhouse growers and marketers to showcase the best grown of their produce. All funds raised from the competition will go to R.E.A.C.H. International to provide schools, clinics, water wells, and other care for the children of Uganda, Africa.

NatureFresh will have the winning varieties on display this week at United Fresh, booth #1238. Stop by and say hello, and we’ll see you there!