SELAH, WA – Bringing a health focus to the forefront of its organic apple offerings, Rainier Fruit has announced the continuation of an important partnership. For its second year running, the company will be featured as the official apple of the Boston Marathon.

“Our sponsorship of the Boston Marathon started out as an effort to promote our products to active lifestyle consumers in one of the largest market regions in the U.S., but it has grown into a culture that epitomizes so much more,” said Andy Tudor, VP of Marketing & Business Development. “The stories we are hearing from our employees, from our customers and from our fans are about health, wellness, overcoming hardship, committing to service, maintaining perseverance, and more. These people inspire us to continue to grow the highest quality, healthiest fruits possible because that’s what it means to be Wholesome to the Core.”

The partnership between Rainier Fruit and the Boston Athletic Association was first broached in 2016, as an effort to promote organic apples to the health-minded crowd at the event. According to a press release, from there the company grew this focus into a multi-year campaign in order to continue delivering healthy fruits and health-focused messages to consumers across the nation. 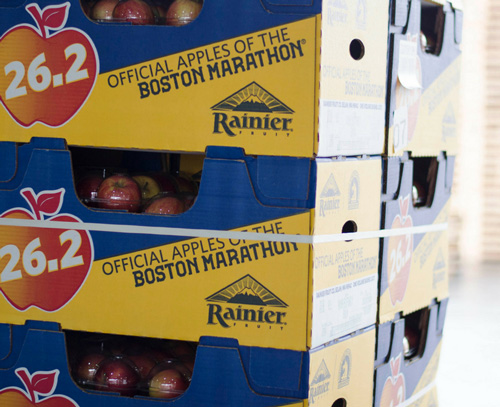 The 2017 Boston Marathon will take place on April 17 for its 121st running. Rainier Fruit will create multiple points of contact throughout the length of the run for the more than 30,000 runners and 500,000 spectators, in addition to the general Boston community. Rainier Fruit plans to give away more than 40,000 pounds of Rising Star apple varieties during the four day marathon, including varieties such as Honeycrisp, Jazz®, Pink Lady®, and Rainier’s proprietary variety Lady Alice®.

“The whole Boston Marathon experience is deeply rooted in history, but it’s also steeped in community,” Tudor continued. “That level of community involvement and excitement creates a sense of loyalty and brand recognition uncommon in today’s consumer marketplace.” 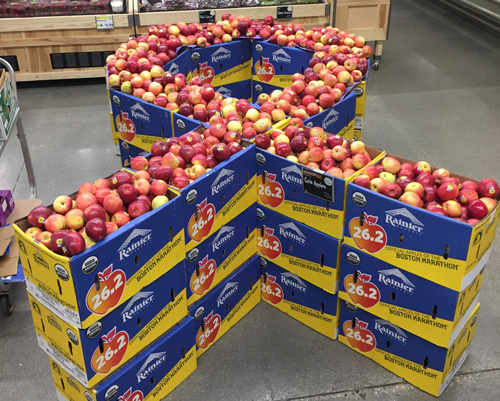 Rainier Fruit will also be spreading its message through social media channels and its company blog, where it will profile employees, runners, and everyday people. Those selected to be profiled are ones making a difference in their own lives, their family’s lives, and in their communities. Rainier Fruit’s blog will also include informational content from brand ambassadors, including running coach Laura Norris of This Runner’s Recipes, and Boston Marathon Race Director Dave McGillivray.

New to the event this year is a partnership with local Boston Whole Foods Stores to support the Martin Richard Foundation on One Boston Day. Established in 2015, One Boston Day commemorates the spirit of Boston Strong after the devastating aftermath of the 2013 Boston Marathon bombings. Rainier Fruit and Whole Foods will donate a portion of all sales of Rainier apples on One Boston Day to the Foundation. The Foundation was established in memory of its namesake, who was a local Dorchester, MA youth who passed away during the event. Through the Foundation, his family is helping him spread his message of peace and creating a legacy of togetherness, teamwork, fairness, sportsmanship, inclusion, and simple acts of kindness.

As Rainier Fruit continues to put a focus on health and community, AndNowUKnow will have all the latest updates on its commitments.