Storm Brewing in California, Felt Throughout the State

CALIFORNIA – One of the most incredible views California has to offer is that of its farming and mountainous regions, which are currently being warned of incoming storms. According to the National Weather Service, commuters and mountain travelers from Northern California are on the look-out for hazardous road conditions as a massive storm moves into the regions.

AccuWeather explains that mudslides are a current threat to the Southern California regions most recently affected by the fires. The storms will affect most, if not all, of the state in one way or another.

Causing the weather advisory in Northern California is a rough of low pressure hailing from the Northwest that will settle over the valley today; according to the Sacramento Bee, Cory Mueller, a meteorologist with the National Weather Service, said the storm system will drop inches of rain and snow. 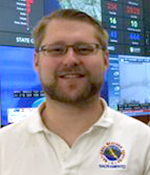 “Commuters’ routes will likely be pretty slow tomorrow morning and evening because of the rain,” Mueller said.

Starting at about 5 a.m. in Sacramento, California, and continuing throughout the day, rainfall will most likely come in between 1 to 2 inches. Temperatures will range in the mid-50s, and wind gusts will reach up to 35 miles per hour. 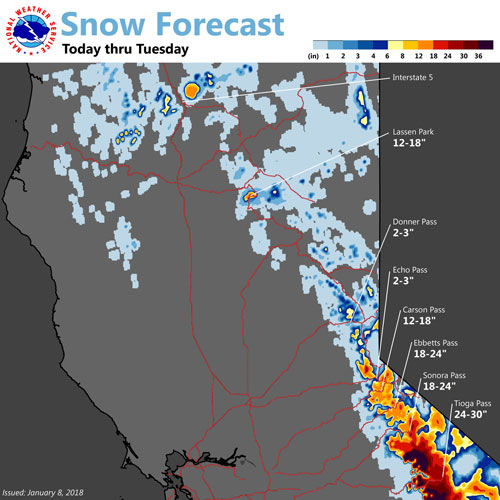 Sierra Nevada residents should expect rainfall to come in between 3 to 4 inches. On top of that, a few feet of snow is expected to fall in areas above 7,000 feet, according to Mueller.

Because of the unusually high levels of snow expected to fall in the areas, Interstate 80 over Donner Pass and Interstate 50 over Echo Summit have both received a Winter Weather Advisory from the National Weather Service, which starts Tuesday at 4 a.m. Travels in the regions should be on high alert for slipper roads, gusty winds, and low visibility, the advisory explains.

Those residing in the Northern parts of the Golden State are not the only ones warned of unusually dangerous situations. Southern California regions who recently dealt with the swooping fires are now worried about mudslides and debris flows with the onset of the storms.

“This storm will be significant for Southern California due to the dry start to the rainy season,” said AccuWeather Meteorologist Jordan Root.

After explaining the circumstances of the storms—which are resulting in the Santa Barbara County evacuations of Thomas, Sherpa, Whittier, and Rey Fire Burn Areas—AccuWeather goes on to express that these storms will most likely be the biggest for Los Angeles and other Southern California cities since last February.

Root then stated, “The foothill and mountain areas, especially areas facing south and west, will receive the heaviest rain with 3 to 6 inches possible. This may lead to flooding and debris flows, especially near burn-scar areas.”

In Southern California regions, Santa Barbara, Ventura, and Los Angeles will be hit the hardest with rainfall between Monday night and Tuesday midday. As these storms move past California on Tuesday, they are likely to hit Las Vegas and the nearby regions' desert terrain, much to the arid regions’ dismay. In this circumstance, there is a possible danger of flash flooding.

Those driving in the areas should be particularly attentive, as there is a possibility of hydroplaning or being caught in mudslides or debris flows.

As these weather conditions affect both the land and the roads, AndNowUKnow will continue to keep you up-to-date with the latest.