YAKIMA, WA - With summer fast approaching, Superfresh Growers® is keeping its finger on the pulse of the apple and pear categories in order to continue driving sales during the hottest months. One way the grower is doing so is by diving deep into past months’ data to prep for the months ahead. Specifically, Superfresh Growers dove into April’s data, finding that core varieties and organics continue to lift the apple category, despite it trending down in the last 52 weeks.

Superfresh Growers also celebrated the fact that it grows and supplies one-hundred percent American-grown apples, all from its Central Washington state orchards—supplies from which make up the bulk of the grower’s summer apple program.

“Superfresh Growers is excited to have American grown apples and pears for our summer program. As multi-generational American farmers, we understand supporting our local farmers is essential to our economy, and we are proud to grow the best apples and pears in the world. For us, growing pears and apples is a way of life. We are honored to be stewards of our land, ensuring we have legacy to pass on to future generations. We are proud to be innovators on farming, food safety, and quality,” said Catherine Gipe-Stewart, Communications Manager.

According to a press release, core apple varieties propped up the category both organically and conventionally in the month of April. Honeycrisp apple sales were on the rise, up 4.3 percent to $82.6 million, placing it as number one for sales. Gala, on the other hand, led in the way of volume, carrying the apple category at 28 percent of total apple volume (volume was down 4.5 percent), with sales up 4.3 percent. In addition, the average price per pound increased by 9.3 percent to $1.36 per pound. Fuji, Granny Smith, and Red Delicious completed the month’s fab (apple) five. 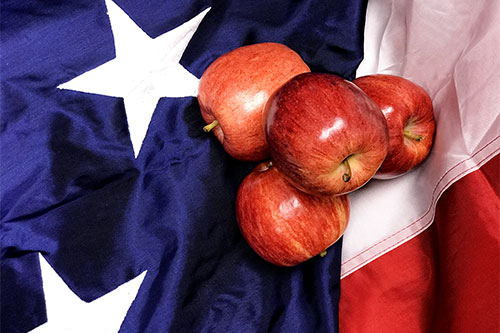 “Supporting American farmers and the American Dream of living and working in the United States is a point we are proud of,” continued Gipe-Stewart. “We have a great supply of American-grown apples to last us through summer right up to new crop harvest.”

The real winner of April was the organic apple category, which saw dollars up 8.6 percent, volume up 8.7 percent, and the price per pound at $2.19—all of which Superfresh Growers attributes to Earth Day promotions. Total apple sales, however, were flat at 0.4 percent, and volume was down -5.5 percent. The average price per pound rose 6.3 percent to $1.74. 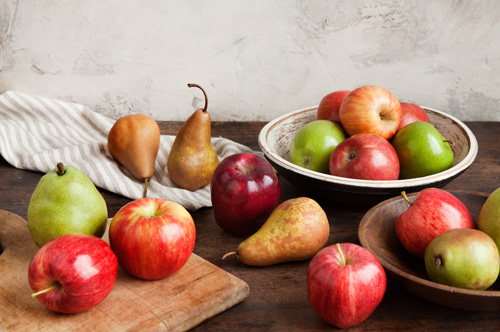 The company also highlighted its exclusive Autumn Glory® apple, which continued to deliver strong sales and year-over-year growth to the apple category. Sales were up 39.9 percent, and volume was up 43.8 percent. The average price per pound was one of the category leaders at a solid $1.96 per pound.

“Autumn Glory fans have been happy to see our season continue to lengthen as volume grows. Shoppers can find Autumn Glory nationwide and enjoy sharing their excitement of finding this treasure on social media,” added Gipe-Stewart.

For the pear category, April sales were slightly down compared to last year, and the usual “big 3” varieties carried most of the sales load. Total pear dollars were down -0.6 percent, while volume decreased -0.7 percent. Anjou pears increased 2.8 percent in sales, with the average price per pound rising 3.1 percent to $1.54. Organic pears dropped in both sales (-6.7 percent) and volume (-8.4 percent).

This information is based on IRI Freshlook® data in regards to the last four weeks, ending April 21, 2019.

For more deep dives into fresh fruit and veg, keep checking back with AndNowUKnow.