YAKIMA, WA - A cherry by any other name might taste as sweet, but how often can you taste the fruit simply by hearing its name?

When I was first told about a newcomer to CMI Orchard’s lineup, that is exactly what happened. The grower/marketer is welcoming the Strawberry Cherry to its portfolio, announcing its debut with the tagline “a very berry cherry.” For those of you familiar with Autonomous Sensory Meridian Response (ASMR), this is your kind of package deal. 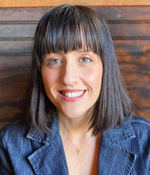 “Strawberry Cherries are big and ruby-red, with light flecking on the outside and a creamy inside—hints of heart-shaped berry married with cherry,” Rochelle Bohm, Brand Manager, shares with me. “With natural fruit sugars as high as 20 brix, the fruit has a low acid content and is delicate like a Rainier, so it must be handled with tender loving care.”

She explains that Strawberry Cherries grow light volume-wise on the tree, resulting in the larger sizing that is sure to become one of its more notable features. And of course a new item means new packaging, which CMI designed to complement the fruit’s already intriguing appearance. With a logo that can only be described as “delicately adorable,” the Strawberry Cherry brand will make its retail debut looking both quaint and premium at the same time.

In addition to its aesthetic appeal, which bridges two premium categories beautifully for consumers, the story of this newcomer is as intriguing as its freckled skin. 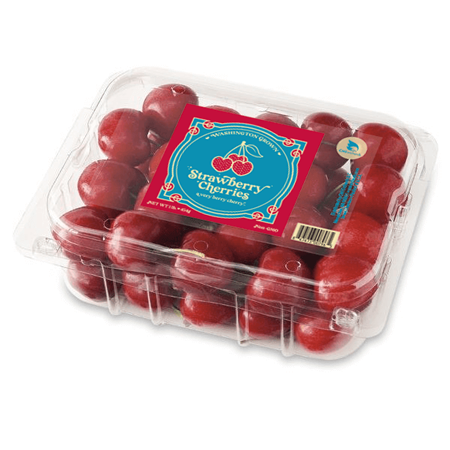 “Strawberry Cherries came to life in an unusual way—the orchard worker hired to prepare the cherry trees accidentally cut branches from an experimental cherry orchard instead of the Sweetheart cherry tree orchard he should have,” shares Julie Bosma.

Julie is part of the family that discovered Strawberry Cherries and has been involved in selling and marketing them since their first crop was discovered in 2004. Mistakenly distributed as Sweetheart cherry trees to several orchardists in the Yakima Valley, seasons passed as the trees grew to the age of fruiting.

When the first blossoms yielded, Julie says her family immediately noticed that their trees were not producing regular dark red cherries.

“When we bit into one, the inside was creamy-white and tasted different than a Red or a Rainier. Confused about the parentage, there was a great deal of investigation into the origin. When testing for known varieties that looked somewhat similar, no one could find a cherry quite like it. From what we could tell, this was an entirely new variety,” Julie recalls.

With a relatively short season—CMI’s first harvest is expected June 15–17, and anticipates to wrap up before the month is out—and an initial volume of about 400 tons for 2020, the more I learn about this latest variety, the more it sounds like an item that will be sought after with cult-like adoration.

“Only a handful of growers have these cherries planted, and the Bosma family has around half of the total tonnage—230 tons this year,” Rochelle shares. “They only grow in the Yakima Valley in Washington State, so this is definitely more on the rare side.”

Certainly keep an eye out for this enticing new variety, which already has me quoting Shakespeare before I’ve even had a chance to try them!