PELION, SC – WP Rawl welcomed Disney Channel to its headquarters this past summer to film a segment for the Emmy award-winning series, “Make Your Mark,” featuring Katie Stagliano, Founder of Katie’s Krops.

Joined by her fellow young gardeners, Stagliano gave Disney Channel a brief insider’s look into her inspiration behind Katie’s Krops Camp and her desire to feed the underserved. You can see the 90 second segment below.

Ashley Rawl, Vice President of Sales, Marketing, and Product Development, said that the company thoroughly enjoyed hosting Disney Channel at this year's camp and that he looks forward to seeing "Make Your Mark" come to life.

“Over the past three years, we have had the pleasure of hosting over 40 Katie’s Krops growers. Katie is just as much an inspiration to these growers as she is to us and we feel so proud to be able to support her,” Rawl added.

As Stagliano explains in the segment, she got her start in produce in 2008 by growing a 40 pound cabbage in her backyard, which she later donated to a soup kitchen. That cabbage ultimately helped feed 275 people. That experience helped shape the foundation of Katie’s Krops, which currently funds 83 youth-run gardens in 30 states from which the fresh harvest is donated to the underserved, according to a press release. 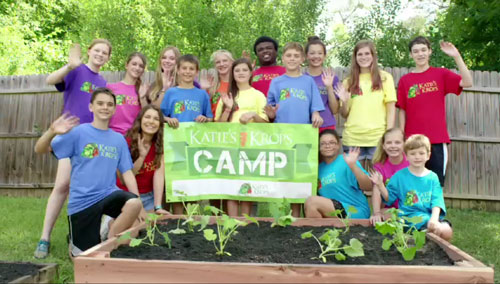