LOS ALAMITOS, CA- When it comes to Karen Caplan’s business savvy and marketing expertise, I would say that there are few like her.  As President and CEO of the produce firm Frieda's Inc., Karen is constantly recognized for her leadership and innovation as both a woman in produce and as a trendsetter in our industry.  This year, Karen is being honored with the College of Agriculture's 2016 Jim Hicks Agricultural Achievement Award from Cal Poly Pomona.

“Karen has spent her career working in the produce industry, marketing new and different types of fruits and vegetables,” says Mary Holz-Clause, dean of the College of Agriculture. “She also is an outstanding example for other women who want to become entrepreneurs or own their own businesses.”

Karen was the first woman to serve as Chair of the United Fresh Produce Association Board of Directors and also as President of the Los Angeles-based Fresh Produce and Floral
Council. She also has served as a Director on the Federal Reserve Bank Board of San Francisco, Los Angeles branch.  The College of Agriculture will present Caplan with the Jim Hicks Agricultural Achievement Award at its 2nd Annual Spring Harvest Farm 2 Table Dinner on Saturday, April 9.

The Jim Hicks Agricultural Achievement Award honors an individual for his or her accomplishments in the agricultural industry, according to a press release. This award is named after Jim Hicks, the President and CEO of Jim Hicks and Co. in Brea, and a longtime supporter of agricultural education. He was the first recipient of the Agricultural Achievement Award. The Spring Harvest dinner is a celebration of agriculture, featuring local chefs cooking foods grown locally.  The event will include some food raised by Cal Poly Pomona students using sustainable practices as well.

As Karen says, although she grew up around the family business (with Frieda Caplan as mother and mentor) a career in produce was not exactly pre-destined. “From the time I was 14 years old, vacations and weekend were spent working at my mother’s side at her stand in the Los Angeles Produce Market,” Karen said. “She never encouraged or discouraged me to join the business, but when I suddenly announced as a sophomore in college that I wanted to make the produce industry my career, my mother was thrilled.” 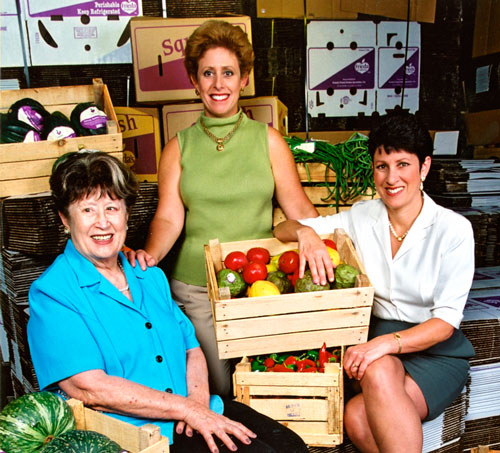 Karen joined Frieda’s after earning her degree in Agricultural Economics and Business Management from UC Davis in 1978. Karen has seen all sides of the business from time spent packing boxes to sales and marketing. She was promoted to President and CEO of the company in 1986. Four years later, Karen Caplan and her sister, Jackie Caplan Wiggins, now the company’s COO, bought Frieda’s Inc. from their mother. Since then, the company has become a leading marketer and distributor of specialty produce, providing 200 types to U.S. supermarkets ranging from Stokes Purple® Sweet Potatoes to Sunchokes®.

Check out the film when you have a chance, through various online streaming platforms iTunes, Amazon, etc. as well as on DVD. I have seen in three times. You will not be disappointed.

Karen also knows how to stay in front of the industry and shares her passion for produce and her food insights via her blog, “What’s on Karen’s Plate?”, and her Twitter account. Karen is also a regular columnist for Fresh Fruit Portal, the Orange County Breeze, and The Shelby Report, where she writes about business, the produce industry, food and more.

On behalf of AndNowUKnow I would like to offer our congratulations to Karen on her recent honor, and I am sure, the many more to come.