CALIFORNIA - A storm system headed toward the California coast could bring relief to the rapidly drying region—and also snowfall that could hamper travel throughout the state.

Recent bouts of rainfall throughout Southern California and in the mountains have alleviated drought conditions in areas including Santa Barbara, San Diego, and Los Angeles, according to an AccuWeather report, and this week’s wet weather could see normalcy return to portions of California. 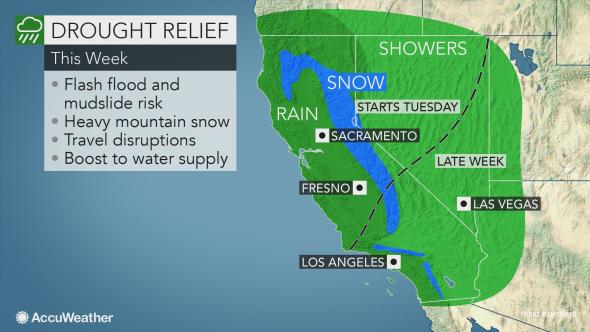 The Weather Channel has reported that parts of the state’s central valley will likely recent an inch or more of rain, and the coastal ranges and lower Sierra Nevada mountains will also experience significant rainfall—as much as five inches of rain.

Meanwhile, heavy snowfall is expected to impact travel—particularly along the important Donner Pass section of Interstate 80. Several feet of snow are expected to accumulate throughout the week—with as many as seven feet anticipated at high elevation.

While short-term delays in transportation are expected, the rain and snow is expected to be a boon for the state's water supply—after below average rain- and snow-fall for several months.

For more on this important growing region, stay tuned to AndNowUKnow.