SOUTHERN CALIFORNIA - At this time of year, Californians can expect some fairly crazy weather, but the latest reports take the cake. Over the weekend, amidst a heat wave that reached 113 degrees, strange weather reigned. According to a report from SFGate, marble-sized hail pelted mountains near San Diego; lightning and heavy winds whipped around the San Bernardino mountains, and mudslides slid down onto Highway 38.

"We're seeing quite a few monsoonal showers and thunderstorms pop up in San Diego, Riverside, and San Bernardino counties," stated the National Weather Service on Twitter. "[There is also] frequent lightning and even hail in the Big Bear area."

As temperature records were broken in Santa Ana, Newport Beach, Vista, and Riverside, thunderstorms formed over the mountains, bringing with them the potential for flash flooding, forecasters reported. 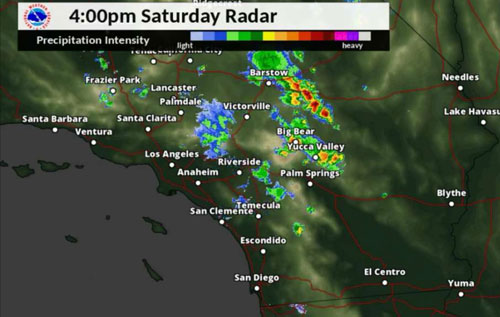 Along Highway 38, rainfall mixed with the ongoing Valley Fire created mudslides. In some areas, such as Riverside, where the temperature hit the record-setting 113 degrees, people reported thunder and rain that evaporated before it reached the ground.

During this time of the year, honeydew, avocados, and mushrooms are in season, but no reports have surfaced regarding the weathers' effect on these crops.

AndNowUKnow will continue to report throughout the season with weather updates on important growing regions.