AUSTIN, TX - Whole Foods Market has seen a fall in stock prices immediately following the announcement of its third quarter financial report, with many analysts suggesting poorer-than-expected sales to be the culprit. While total sales for the quarter increased to a record $3.7 billion, comparable store sales decreased 2.6%. Bloomberg reports that analysts had originally tried to clock in Whole Foods at a 2.4% decrease.

Co-CEO Walter Robb was not discouraged, however, releasing the following statement along with the report, “We delivered record sales of $3.7 billion this quarter along with a sequential improvement in our comparable store sales trends. We are continuing to make measurable progress on fundamentally evolving our business including the successful launch of our new 365 format, expanded value investments, and increased efforts to better understand and provide personalized offers to our customers. We are seeing some encouraging signs in terms of our sales and believe our nine-point plan will produce strong returns for our shareholders over the long term.” 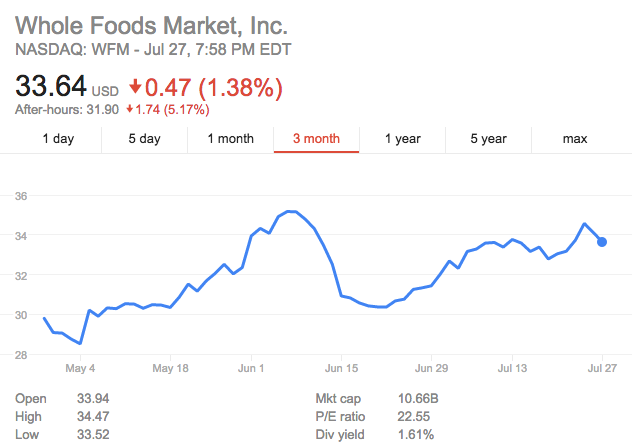 The falling store sales are likely due to increased competition from retailers growing their organic and natural foods sections, an area where Whole Foods has historically shined. Bloomberg reports that Whole Foods is suffering through its worst sales slump since 2009, while quietly in the background, lower-priced retailers are moving to take over the sector.

One way Whole Foods sees to take on this perception as being a “more expensive” healthy food grocer is through it’s newly implemented 365 by Whole Foods banner, which has 20 leases signed currently.

“Just two weeks ago, we opened our second 365 byWhole Foods Market store. Designed around affordability and convenience and supported by enhanced digital experiences, our 365 stores deliver a fresh new format to the marketplace,” said John Mackey, Co-Founder and Co-CEO of Whole Foods Market. “Through lower capital and operating costs, we are able to offer great values to our customers, and the response has been overwhelmingly positive.”

Other notable features from the report include:

As more details about new locations for 365 banner are revealed, and the company begins to take increased competition in the marketplace, AndNowUKnow will continue to bring you updates.