STELLARTON, NS - Sobeys parent company Empire Company Limited is introducing the Great White North to its FreshCo banner as it makes moves to expand its businesses into Western Canada. The retailer announced plans to open 12 locations in British Columbia and Manitoba this year, with many of the shops taking the place of former Safeway stores.

“We are in the midst of turning around our Western Canadian stores. We have improved our standards, execution, and marketing,” said Michael Medline, Empire’s President and CEO. “We are extremely proud of the progress our teammates in the region are making. This decision in B.C. is a major building block in improving our customer service, employee relations, profitability, and flexibility in the West.”

The move not only advances Sobeys’ plans to expand FreshCo into new markets, but also implements a strategy to improve store profitability and allow conventional Safeway stores to compete in a level playing field in B.C. According to a press release, 25 percent of Empire’s 255 Safeway and Sobeys full service stores will be converted to the FreshCo banner, with the company offering voluntary buyouts to eligible long-service Safeway employees that could cost approximately $35 million. 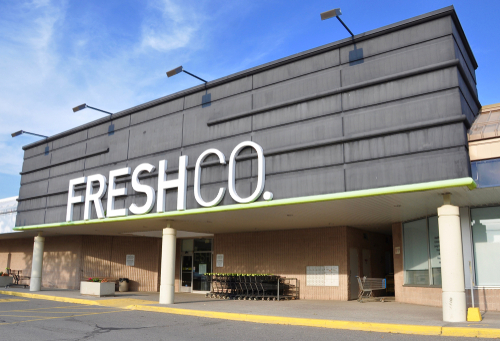 The first five FreshCo stores are slated to open this spring in B.C. and Manitoba, with the additional seven stores opening in B.C and five additional Safeway stores closing in the first half of fiscal 2020.

To stay ahead of grocery retail happenings, AndNowUKnow will continue to bring you the latest.