LOS ALAMITOS, CA - She was known by many names, wearing the crown of “Kiwi Queen” and “Mushroom Queen” proudly. After passing away January 18 at the age of 96, the industry is mourning the loss of this incredibly vibrant woman and Founder of Frieda’s Specialty Produce while also remembering her incredible legacy.

Frieda began her career in produce by working for the Giumarra Brothers on the 7th Street Wholesale Produce Market. After several years, the landlord of the market—Southern Pacific Railroad—encouraged her to start her own business. This was a challenge she leapt into and also a move so characteristic of Frieda, the team at Frieda’s Specialty Produce shared in a statement. On April 2, 1962, she opened Produce Specialties, Inc. on the Los Angeles Wholesale Produce Market. Its light lavender signs drew attention and would later become the company’s trademarked color, as most people within the industry still associate the purple hue with Frieda’s Specialty Produce. 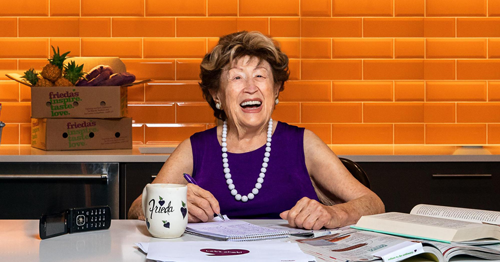 She was joined in business by both of her daughters: Karen Caplan in 1977 and Jackie Caplan Wiggins in 1983. Frieda’s greatest joy was that she got to work side by side with her daughters every day. Most recently, two of her grandchildren, Alex Berkley and Sophia Jackson, joined the now third-generation family business.

Throughout her life, Frieda was a political activist. She ran student body campaigns while she was a student at UCLA and was even named “Miss UCLA” for being the best-known person on campus. She was active in many local organizations, which provided support to people regardless of age, gender, race, color, sexual orientation, or financial status. Some of her favorites were: Dramatic Results, Trust Women, and Women Against Gun Violence. She also supported the ACLU, Anti-Defamation League, and Planned Parenthood.

The Fresh Produce and Floral Council (FPFC) released a statement upon hearing of Frieda’s passing as well, noting her contributions to the produce industry.

“Caplan has been praised and awarded for making the produce industry one of the greatest for female empowerment and opportunity, since her start in the 60s,” the statement reads. “Her most recent award, in 2019, was the Produce Marketing Association's Women's Catalyst Award, which recognized her leadership in advancing women in the industry. Caplan is responsible for introducing the Kiwifruit to the U.S. market in the early 60s, as well as many other exotic fruits and vegetables that we have all come to know and love.”

The FPFC's 2020 Chairman of the Board, Brian Cook of Pete's, stated that he remembers Caplan's openness in receiving new blood to the produce family when he first entered the industry.

In addition to her many passions, she was part of a longitudinal study conducted at UCI Mind Institute in Irvine, CA, to help find the cause and cure for Alzheimer’s. After her passing, her brain was donated to UCI Mind so it could be studied to help solve this terrible disease.

A Celebration of Life will be held on February 22, with the location and time to be announced. To read more from her family and friends, please visit our In Memoriam trubute as well.

We here at AndNowUKnow extend our condolences to the Frieda’s family.