LOS ANGELES, CA - Water-wary Southern California is going to get another big influx of rain and snow from a new storm system. Forecasters predict most of Southern California will see some showers throughout Friday and into Saturday, with a strong chance of snow in the region’s mountain ranges.

NBC Los Angeles reported that snow is expected Friday and Saturday in the San Gabriel Mountains in Los Angeles, Ventura, and Santa Barbara counties, and some snow may even reach the Antelope Valley. The National Weather Service (NWS) issued a winter weather advisory warning that difficult travel conditions will be in effect in the San Gabriel Mountains from 10 a.m. Friday through 4 p.m. Saturday.

“Periods of snow, gusty winds, and low visibilities make for dangerous driving conditions and could lead to road closures and travel delays,” NWS Oxnard stated, noting roadways including Interstate 5 near The Grapevine, Los Angeles Crest Highway, and possibly Highway 14 may be affected. 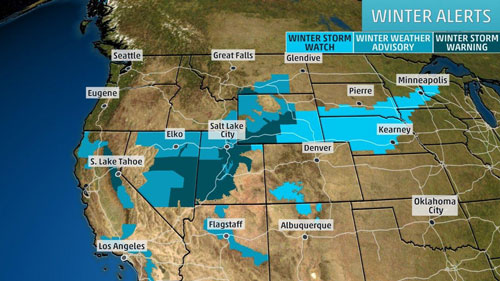 In addition rain and snow in Southern California, Northern and Central California will also be able to stock up on some winter wetness. Winter weather advisories were also issued in the following regions:

Northern California saw much of its snow Thursday and early Friday morning. NWS says 11 inches of snow has been recorded at the Northstar ski resort near Truckee and about 10 inches at Mt. Rose southwest of Reno. Up to 7 inches were reported at Heavenly in South Lake Tahoe.

As more updates come in on this storm and others, AndNowUKnow will continue sharing the news with the industry. Stay tuned!