UNITED STATES – This week, unseasonably hot weather is coming to the country—particularly the West Coast, where dry conditions have made it easier for heat to take hold.

“A large area of high pressure will transport some of the warmest air since last summer across the West Coast early this week,” AccuWeather Meteorologist Brett Rathbun said in a report from the news source. “Records will be challenged from Washington to California.” 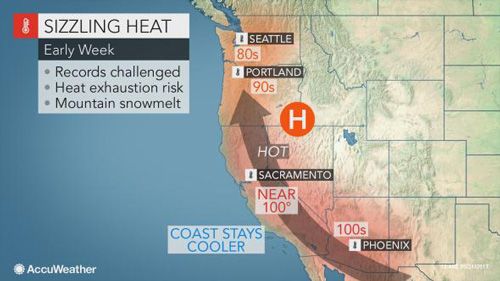 Conditions up and down the West Coast could be record-breaking for this time of year and even approach late-summer temperatures.

“Seattle could have its first day above 80 F since last August [on Monday],” Rathbun said. “Portland, Oregon, could break 90 F for the first time since August.”

Further South, weather in the high-nineties will hit Sacramento, California, approaching the 100-degree record for mid-May. 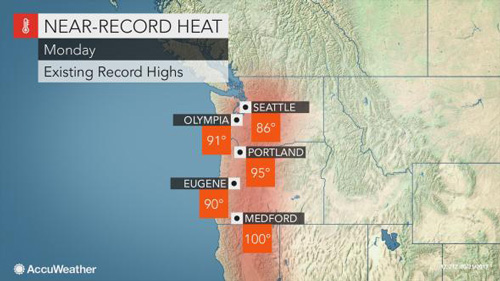 The unusual weather will likely lead to rapid snowmelt. California waterways having just recovered from several years of drought after one of the wettest winters on record will be bolstered by even more water this week—leading in some cases to flooding.

"The melting snow will cause rivers flowing out of the Sierra Nevada to rise," AccuWeather Meteorologist Jim Andrews said. "The Walker River near Mason, Nevada, is expected to reach major flood stage later this week."

Andrews also noted that a storm system set to hit the coast mid-week would lead to cooler temperatures as the end of the month approaches.

How will West Coast weather progress moving into summer? AndNowUKnow will report.