NORTH AMERICA - For many on the Atlantic coast, it is storm season. Already, we have seen Tropical Storm Hanna make its way through Texas and Tropical Storm Laura come through Mexico. Now, the Atlantic Ocean has recently given way to multiple incoming storms with Paulette, Rene, Sally, Teddy, and now Vicky being the most recent additions in what is on track to be a historic hurricane season.

Forecasters say the last name on the Atlantic hurricane season’s list for 2020 could soon be exhausted as additional disturbances are being monitored this week. According to AccuWeather, Cristobal and every storm from Edouard through Vicky all became the earliest storm to develop in the basin for their respective letters in 2020. 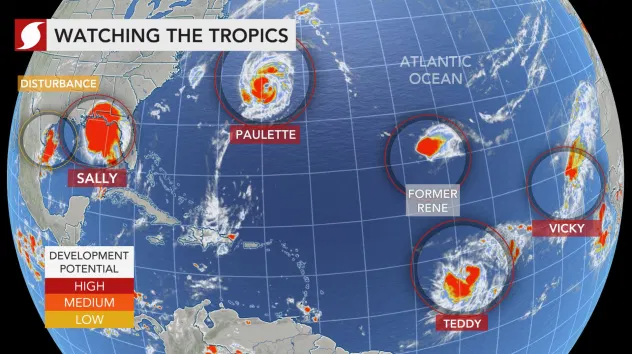 The news source reported Sally could be dropping 30 inches of rain on parts of the Gulf Coast while forecasters are still keeping tabs on the latest developments of Tropical Storm Teddy and Tropical Storm Vicky.

Prior to Rene's dissipation on Monday afternoon, this was the first time that five tropical cyclones could be seen swirling simultaneously in the basin since such a phenomenon occurred back on Sept. 10-12, 1971, the National Hurricane Center confirmed on Monday.

AccuWeather meteorologists say that Tropical Storm Teddy is expected to strengthen over the next several days, and very well could reach hurricane and then major hurricane status later this week.

Next on the list of tropical storms for 2020 beyond Vicky is Wilfred. Since the ‘W’ storm record holder was set in October, it is likely that it too will fall during 2020.

To learn more about the storms brewing off the Atlantic Coast, click here.

AndNowUKnow will continue to report the latest on Mother Nature and her effects on the fresh produce industry.