LEAMINGTON, ON - Peter Quiring, Founder and President of NatureFresh Farms, joined us for an exclusive interview to tell us how he became “the accidental farmer” and how his team is continuing to cultivate the company’s brand and vision. From technology and innovation to mobile greenhouse education, this is the NatureFresh Farms story.

Someone once said, “Necessity is the mother of invention.”

Before Peter Quiring, Founder and President of NatureFresh™ Farms, found himself in the midst of overseeing one of North America’s largest greenhouse bell pepper operations, he was just a young man pursuing a dream in mechanical engineering. Little did he know that dream would soon evolve into the multi-million dollar venture NatureFresh is today.

“That’s because, in part, I had no other choice,” Peter laughs.

Armed with his engineering knowledge and the resources to bring greenhouses to the modern age, Peter saw fit to start his own company called South Essex Fabricating (SEF), located in Leamington, Ontario, in 1994. As the forerunner to NatureFresh, SEF was established to drive innovation in Canada’s high-tech commercial greenhouse industry, providing growers with structures, heating systems, and logistics. 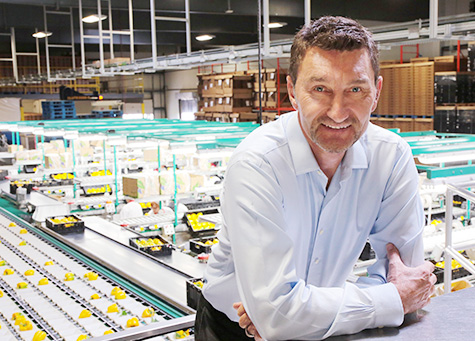 “I never wanted to get into the marketing side of this business,” Peter tells me. “Originally, I wanted to build a state-of-the-art greenhouse operation and sell it, but that didn't work out. So we kept building greenhouses and I ended up falling in love with the business. It was fun and we were hiring young talented people, but we never wanted to do the marketing. That became a necessity as the company continued to grow.”

Thus began the story of the accidental farmer, one whose predilection and passion for automation and agriculture came together to build a company driven by advancements in technology, product innovation, and continued investing in its employees to grow the future.

NatureFresh has been, and continues to be, one of the companies at the forefront of the greenhouse technological revolution. SEF was just the beginning. It helped to bring leading-edge ideas like thermal storage, CO2 capture, biomass heating, water recycling technology, and the latest in greenhouse innovations, such as diffused glass, into the industry sixteen years ago. Peter is continuing that legacy with NatureFresh. 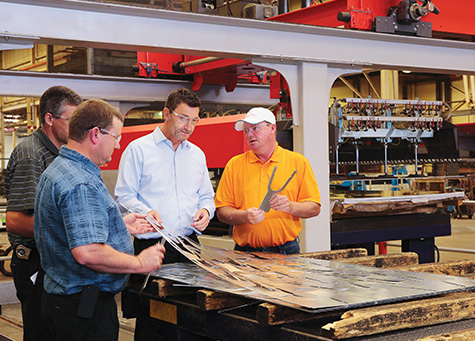 Now, the company boasts 100 percent zero nutrient water discharge into the environment and is just starting to install commercial dehumidification systems in greenhouses after experimenting with it for the past four years. NatureFresh also became one of the first successful businesses to grow peppers under lights, and will continue to do so this coming winter season.

“A big part of our success is that we’re early adopters of new technology." - Peter Quiring

The results are speaking for themselves.

“What keeps us competitive is our core knowledge of the industry and hands-on experience; we are constantly innovating to differentiate and grow our business. Otherwise, we’re out of business,” Peter tells me. “A big part of our success is that we’re early adopters of new technology. It’s helped us stay in business when times are tough. Not only do we continue to adopt new technology and help develop them ourselves, but we’re obviously a significant farming operation as well.”

Since its foundation, the vertically-integrated corporation has built more than 1,500 acres of greenhouses for growers in North America and owns 130 acres in Ontario with an additional 30 to be added by next year. Today, the company offers a broad variety of greenhouse produce items, ranging from TOVs and beefsteak tomatoes, bell peppers, both organic and conventional, seedless cucumbers, and several types of specialty tomatoes. 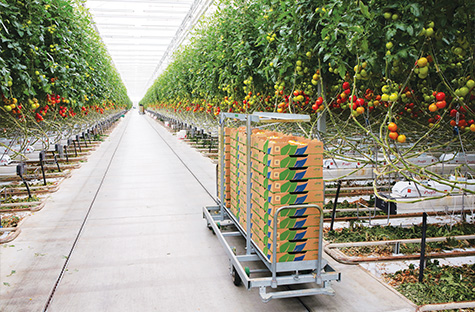 “We have a stringent quality assurance program to ensure we are shipping the best product to all of our customers,” Chris Veillon, NatureFresh’s Director of Marketing, tells me. “Our customers have become accustomed to purchasing top quality NatureFresh Farms product from our retail partners, which has helped drive and maintain our significant growth.”

With the arrival of the first tomato plants in NatureFresh’s new Ohio greenhouse scheduled for later this fall of 2015, the company is reducing the need to source from other suppliers in other countries and regions.

“We believe in growing our own product to ensure the same quality that our customers have grown accustomed to and is proprietary to us,” Chris continued. “That NatureFresh-branded product is going to be the same twelve months of the year. We’re heading in a very positive direction with our expansion into Delta, Ohio.”

A company of this scope is nothing without a robust merchandising initiative in place, and both Peter and Chris are quick to tell me that they still have some radical ideas brewing in the kitchen.

Designed by SEF, the TomBar™ gives consumers the opportunity to select the tomatoes they want from a bar similar to a traditional olive bar and place them in their own TomBox™. 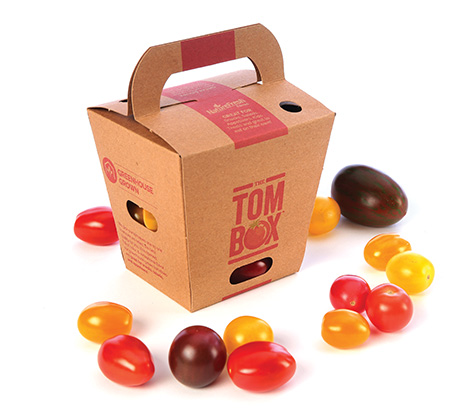 “Consumers like the TomBar™ because it gives them the ability to choose what they want. More than anything though, there’s a consistency to the product,” Peter tells me.

With consumer attitudes trending towards accountability for what they put into their bodies, NatureFresh says progressive growers and retailers must be driven to be better communicators.

It’s this educational philosophy that bridges the gaps between NatureFresh as a company, its employees, and the consumers.

Take a walk through the NatureFresh offices and farms and you will find that most of the employees are in their early 30s. That’s not intentional either. Outside the front door, there’s an old weathered sign, its faded letters bearing the brunt of the wind, which says, “Help Wanted.” NatureFresh has always had an open door policy since day one way back in 1999, but Peter says it’s not just a policy, it is everyday life.

“My favorite part is when I see the growth of our people from within,” Peter tells me. “We don’t have a lot of degrees floating around here, but that’s okay with us. We’re quite happy to educate and mentor people along the way. If they have a good attitude and the desire to learn and excel in their work, then we give them an opportunity to become a part of our team. Some evolve into positions as growers or supervisors, or a team manager. Many employees are learning different aspects of the business. That’s unique in this day and age.”

Peter’s son, Matt, has been a key component of the company’s sales team. Even at 26 years old, Matt is continuing to learn from senior management, including his father. John Ketler, Peter’s son-in-law, heads the company’s farming operations as General Manager and continues to be a key and integral part of the business as well.

“I am very proud of what Matt and John have accomplished to date,” Peter says. “Their dedication to the business has helped our growth significantly. These guys always rise to the occasion; they are having a lot of fun!” 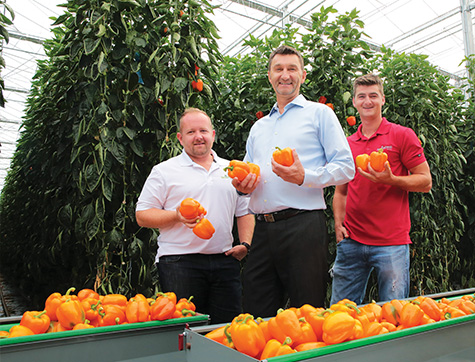 When you hear Peter speak about the company’s culture, it’s not top-down, but rather top-across. Across all departments of the company, the respect among each employee is the same no matter the compensation differences.

Peter has even gone so far as to install an industrial kitchen in the company headquarters two years ago, featuring a full-fledged grill, ovens, a stove, and so much more – all restaurant-quality. Healthy, inexpensive meals utilizing NatureFresh products are catered on-site by professional chefs every day for up to 200 employees a day. The beauty of it all is once a recipe is approved, it makes its way into the company’s recipe listings online.

The investment in employees and their education pays dividends every day. It’s a huge part of what makes the company so successful. True satisfaction, however, comes from being able to make an impact for both retailers and consumers simultaneously.

“We have people come up to us and say, ‘Nope, not interested. I only eat organic.’ We have no problem with that, but let us tell you what conventional growing is to us. By the end of it, people almost always say, ‘You converted me. I’ll buy your product.’ That’s always exciting to see,” Peter tells me.

Peter is referring to NatureFresh’s mobile Greenhouse Education Center (GEC), which has made its premiere debut at retailers across North America. The GEC is designed to give consumers a first-hand, up-close, and personal experience with greenhouse vegetables. The 38-foot custom-built trailer contains six different cassettes that hold a variety of products, including three different colors of bell peppers, English cucumbers, cocktail tomatoes, and cherry tomatoes, as well as a live bumble bee eco-system that’s a hit among kids. 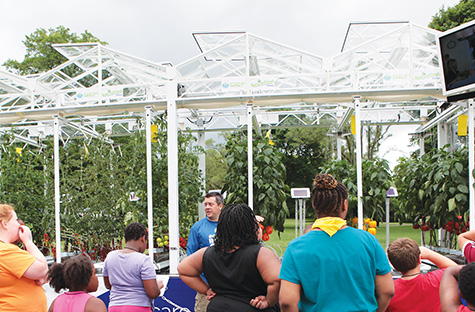 “Almost everybody walks up to our GEC and says, ‘Wow. That is so cool.’ Adults and kids of all ages are walking up and pressing their face up against the glass,” Chris says.

Knowledge is power. Once a consumer knows where a product is from and who the grower is, they will be more likely to pick up that specific product.

“When three of the biggest retailers in North America are asking you to be at their stores every weekend, you know you have an opportunity to educate their consumers and make a difference,” Chris explains. “In a mere two minutes, you can shape a consumer’s decision. If you can articulate to someone the value of what they can purchase from a grower they know, you’ve created a customer for that day, that week, that month, or even that year.”

“From start to finish, everything we do is tied up in the food business, but we like to say we’re in the health business." - Peter Quiring

With that level of engagement, you may have even found a customer for life.

Though Peter had initially thought he never wanted to get into the marketing side of the business, things are continuing to look bright for NatureFresh.

“From start to finish, everything we do is tied up in the food business, but we like to say we’re in the health business,” Peter tells me. “We’re growing the future of fresh by using innovation to maximize and optimize all we do, including the people.”

From accidental farmer to overseer of one of the largest independent greenhouse produce growers in North America, Peter has shown time after time his level of dedication to the business and his employees. Though NatureFresh still operates like the small company it was sixteen years ago, its innovation and power to enlighten and inform is a force to be reckoned with. They are the grow-to people.