BENTONVILLE, AR – As the company continues to explore various strategies to keep it ahead of its competitors, Walmart has announced both a new CEO for its U.K. supermarket chain, Asda, and received an updated “Buy” status from investment firm, the Jefferies Group.

Jefferies previously had the retail giant listed as “Hold” for purchase on company shares, but updated Walmart’s share status on Monday in a research report to its investors, according to The Market Digest. In sync with this move, the firm also raised the Price Target of Walmart stocks from $60 to $82.

This announcement from Jeffries is also aligned with other market analysts who have recently updated their stance on the company’s stock. The Market Digest noted that the Telsey Advisory Group recently marked Walmart as ‘”Market Perform” and raised its price target for the company, as did RBC Capital Mkts by slating Walmart as “Underperform” with a price target increase. 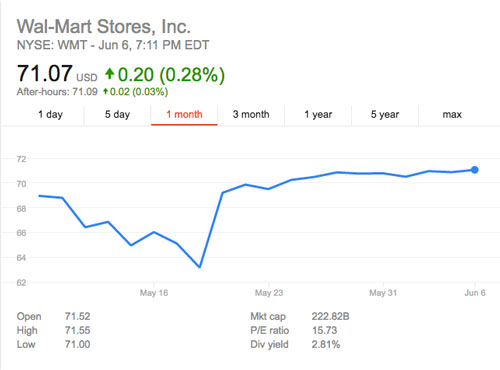 Consumers and analysts alike could be responding to the company’s Q1 reportings which saw a reported $0.98 earnings per share, which was higher than the $0.88 estimated by analysts.

As we previously reported, Walmart recently released a statement that it was going to focus on executive and leadership decisions to maximize the company’s effectiveness in American markets. These strategies appear to be working in some regards as the company took the top spot in yesterday’s released Fortune 500 list.

Moving to executive shakeups in the company’s overseas market, Walmart’s U.K. chain, ASDA, announced that its current CEO, Andy Clarke, will eventually be replaced by its incoming COO, Roger Burnley.

According to Bloomberg, Clarke stated that he took the time to find the right fit for the position, and the company will now be prioritizing market share over profit. Clarke said that the strategy will be three-years in implementation after sales for the company have fallen for seven quarters running.

Walmart or Asda did not state when Clarke would be stepping down from U.K. operations or when Burnley would take his place. Burnley will join the company first as COO in October, coming from one of Asda’s leading competitors, Sainsbury's.

As Walmart continues its national and international strategies to remain on top, keep an eye on AndNowUKnow as we report on the retail giant and other industry financials.