WASHINGTON, DC – At The Future of Agriculture two-day event this week, the White House and USDA honored a select few new and beginning ranchers and farmers as “Champions of Change.”  Kristin Fritz Kubiszak of Brookside Farms, a grower for MBG Marketing, was one of only 15 national honorees. 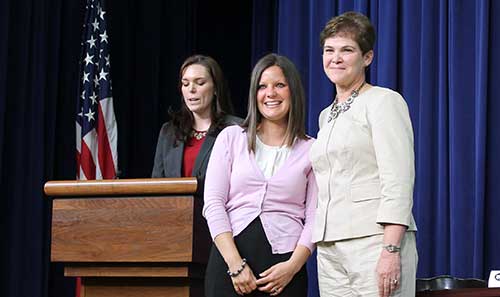 “It was a true privilege to represent the blueberry industry as a Champion of Change.  Since we grow blueberries which are known for their great flavor and incredible health attributes, I was especially pleased to learn first-hand about some of the efforts by the First Lady to encourage children to eat a healthy, brighter array of fresh fruits and vegetables” said Kristin. “It was great to share the story our family blueberry farm. It has always been a passion of mine to educate others about what we do, and this was another great opportunity.”

Kristin is the retail manager for Brookside Farms, which is located in Paw Paw, Michigan.  Her family is a fifth generation farm that distributes fresh blueberries through MBG’s cooperative marketing network under the Naturipe® brand, according to a press release.

Aside from working on the farm, Kristin sits on the board of directors for the Van Buren County Farm Bureau as Chair of the Promotion and Education Committee.  With this position, she educates the community with trips to local schools, the Ag Venture tent at the local Youth Fair and other youth and consumer education programs, according to a press release.

“Kristin is another member of the Fritz family farming operation that makes us proud that they are part of our MBG & Naturipe families.” said Bob Hawk, President & CEO of MBG Marketing.

The honorees were also given a tour of the First Lady’s Garden at the White House by Sam Kass, President Obama’s Senior Policy Advisor for Nutrition Policy and Let’s Move Executive Director.

Congratulations on this honor, Kristin!

Based upon our family’s vision of long-term growth and preserving our heritage, we will operate our farm business in...