BAKERSFIELD, CA - We are deeply saddened to share that Sal Giumarra passed away at the age of 95 in Bakersfield, California, on March 25. During his tenure as President of Giumarra Vineyards, the team and company expanded its footprint and established the GrapeKing label. Overall, Sal was with the company for 50 years.

He was known for a boots-on-the-ground approach, working in the fields alongside his employees, with many of his farming innovations now standard practices in the industry. For 41 years, Sal served as a member of the Arvin-Edison Water Storage District Board of Directors, providing leadership to the District when it implemented critical water management programs and projects for District landowners.

Like many of his generation, Sal was born to immigrant parents and grandparents. His father and grandfather, Salvatore, came from Ragusa, Sicily, and settled in Los Angeles, where Sal was born on July 16, 1925. He began a life of farming at age 13, working in the fields beside his father after school hours and every summer. 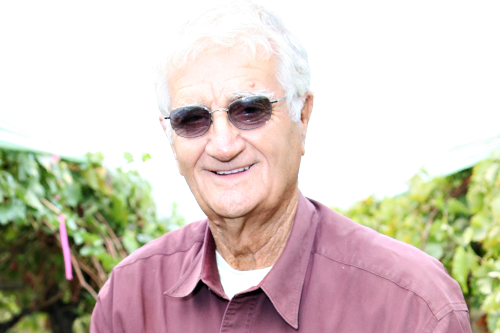 Sal attended Pacific Military Academy in Culver City beginning in the second grade. Pacific reinforced the core values he learned at home with his family: honor, discipline, pride, and duty. Sal’s father, Joe, began to grow his own produce in Delano and Bakersfield, and in 1942 moved his family from Los Angeles to Bakersfield. Sal graduated from Bakersfield High School in 1943, lettering in football, the sport which he loved. He received his draft notice shortly after graduation and, although he might have claimed exemption as part of a farming family, he joined the Army Air Force that October.

After the Army and graduation from Bakersfield College, where he played football on the 1948 Renegades championship team, Sal joined his brother, Al, raising cattle and farming cotton until his father prevailed on them to join the grape-growing operations at Giumarra Vineyards. In the 1960s, Sal was President, helping to grow Giumarra Vineyards global business.

Joe Giumarra, Sal’s nephew and currently Vice President of Field Operations and member of Giumarra Vineyards’ Board of Directors, described Sal as a force of nature, a visionary, and a life-long inspiration whom he saw as a second father.

“Sal had a green thumb. His first love was grapes, but he was also a grower of tree fruit, potatoes, tomatoes, onions, carrots, wheat, barley, and cotton. He was as capable with tree fruit and with wheat, barley, and cotton. His early application of scientific methods, especially in the use of size and bloom sprays for Thompson Seedless, made Giumarra one of the premier growers in the world,” Joe said. “That success was equally attributable to Sal’s attention to packing methods and his obsession with quality control. But most of all, Sal was persistent. He would not allow failure to discourage him or disillusion his employees. If something didn’t work he’d say, ‘it was just a trial experiment,’ and move on. He inspired loyalty in all-from managers to field employees. His is a great loss.”

“He was a pioneer in our industry, from using Gibberellic acid in the stretch/bloom and sizing of table grapes to developing the first two-row sprayers. His findings are still in use worldwide. But it was his personal qualities that stood out,” Kuntz said. “He never asked anyone to do anything he wouldn’t do. He trained everyone, raising people up, teaching those who couldn’t read or do the math needed for a job until they could advance. He ran his ‘escuelas’ in a mix of English and Spanish with an occasional bit of Italian. I loved working with him, and I loved him.”

Sal, who knew no bounds in the love for his family, was predeceased by his wife of 48 years, Florence Easton, and by their daughter Sally. He is survived by Cynthia, his wife of 25 years, his brother Alfred and his wife Rosemary, and by his daughters from his first marriage, Gina Giumarra MacArthur, Dede Giumarra, and Terri Giumarra, by his grandson Henri MacArthur and his wife Sarah, his granddaughter Grace MacArthur, and his great-grandchildren, Cassidy, Jace, and Raelynn MacArthur. Beloved husband, father, and grandpa, he is and will be deeply missed by all and will be remembered as a man whose word was his bond and who was kind, generous, and ready to help anyone in need.

Sal was a faithful member of the Canyon Hills Assembly of God. A Memorial and Celebration of Life will be held at Canyon Hills Church at 10:30 a.m. on July 16, which would have been Sal’s 96th birthday.

In lieu of flowers, memorial gifts in Sal’s honor may be directed to Veterans of Foreign Wars or to a charity of your choice.

We extend our deepest condolences to those who knew and loved Sal Giumarra as we grieve this great loss.