SACRAMENTO, CA - Californians know first-hand that this season has been wetter than any in recent memory, but now the proof is in the numbers. New state surveys of the Sierra Nevada snowpack are nearing records set over three decades ago, sitting currently at about 185 percent of average.

Frank Gehrke, Chief of the California Cooperative Snow Surveys Program and conductor of the March 1 survey at Phillips shared, “It’s not the record, the record being 56.4 (inches), but still a pretty phenomenal snowpack…January and February came in with some really quite phenomenal atmospheric river storms, many of which were cold enough to really boost the snowpack.”

Readings done electronically at 98 key points across the 400-mile-long mountain range show that the March 1 snowpack held 45.5 inches of “surface water equivalent,” compared with a historical average of 24.6 inches, according to the state Department of Water Resources (DWR). 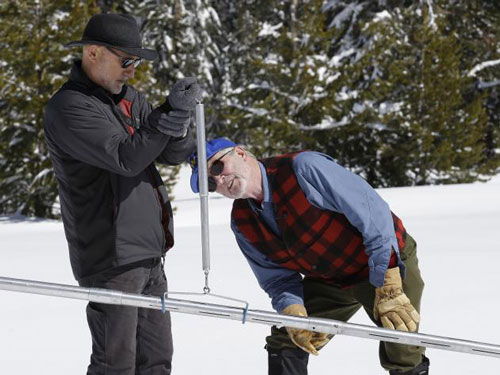 In a DWR release, State Climatologist Michael Anderson said the winter season has been “historic,” especially in the central and southern Sierra where elevations are higher and where snowfall has been near the 1983 record amount.

This is a prime place to be, Gehrke added, as April 1 levels are often used as key marker to predict how the snowpack might hold up past the end of the wet season.

"We've busted through April 1 values pretty much at all snow courses throughout the state," Gehrke explained.

The March 1st snow survey has a well above normal snow pack across the Sierra. The #snow is impressive even from a distance! #CAwx #cawater pic.twitter.com/zg1q7DwVcj

In total, the DWR reports precipitation levels since October first as follows:

Collectively, the three regions had a total of 178.2 inches of rainfall, or 218 percent of the five-month average (81.5 inches).

The next report from the DWR will mark the much-awaited April measurements, so stay tuned for all the details.