WASHINGTON, DC - The H-2A guestworker program is a hot button topic in the agriculture industry, coming into focus as part of President Trump’s platform of immigration reform, having hosted a roundtable with stakeholders on the subject earlier this year. Now, Congressman Bob Goodlatte (R-Va.), Chairman of the House Judiciary Committee, has unveiled a bill to create a new agricultural guestworker program, dubbed H-2C, to provide America’s farmers and ranchers with access to a legal, stable supply of workers. 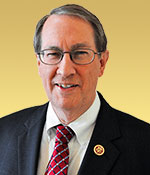 “For far too long, the broken H-2A guestworker program has buried American farmers in red tape and excessive costs without delivering access to a stable and reliable workforce,” Congressman Goodlatte said in a press release. “It’s clear that the current program is outdated and broken for American farmers, and it’s well past the time to replace it with a reliable, efficient, and fair program that provides American farmers access to a legal, stable supply of workers, both in the short- and long-term, for seasonal as well as year-round work.”

Under Goodlatte’s proposed bill, the guestworker program is administered by the U.S. Department of Agriculture and covers year-round employers, like dairies, aquaculture operations, food processors, and others. Further, the AG Act allows experienced unauthorized agricultural workers to continue working in agriculture and provides more flexibility to American farmers with respect to housing, transportation, and touchback periods. For a full summary of the AG Act, click here and for bill text click here.

"We support Chairman Goodlatte’s introduction of the AG Act, as he recognizes the crisis in agricultural labor and the need for a more effective guest worker program," the United Fresh Produce Association stated, when asked for comment. "We encourage members of the Judiciary Committee to move legislation out of committee so we can begin to make progress on addressing this critical issue. We intend to work with Chairman Goodlatte and other Congressional leaders to eventually pass legislation in the House, introduce and pass legislation in the Senate, and finally find a permanent solution in conference that the President will sign."

Critics of the existing H-2A program condemn it for being expensive, time-consuming, and flawed as it includes lengthy labor certification processes which may put employers at a competitive disadvantage in the marketplace.

“The AG Act replaces the flawed H-2A program with a new, flexible, and market-driven guestworker program that is designed to meet the needs of the diverse agriculture industry when not enough American workers can be found,” Congressman Goodlatte continued. “The new program is to be operated by the USDA, an agency that clearly understands the unique needs of America’s farm and ranch operations and the importance of getting perishable agricultural commodities to the marketplace in an efficient manner, and expands the guestworker program to year-round agricultural employers. I thank the agriculture community for the input they provided on this legislation and look forward to bringing it up in the House Judiciary Committee this week.”

According to the statement, the Agricultural Guestworker Act, or the AG Act, replaces the current H-2A program with a reliable, efficient, and fair program which will be marked up by the House Judiciary Committee on October 4, 2017.