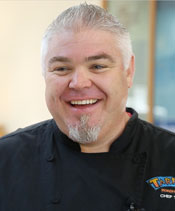 “Celery is a staple in professional kitchens around the world, adding a crunch when raw and a distinct yet mellow flavor when cooked,” Fisher said. “In this recipe, the celery and radish made this bahn mi bun delicious and vibrant and aides in the addition of fresh produce to your plate.”

According to a press release Chef Todd has more than 20 years of experience in the culinary industry and has been working with Duda for over a decade. With that kind of relationship between them, Duda executives knew Todd was the right man to represent their business and products at PMA.

“Chef Todd brought the fun and flavor to PMA Foodservice this year,” said Nichole Towell, Director of Marketing at Duda Farm Fresh Foods. “Our winning recipe was a true expression of the conference theme this year, “‘Innovate the plate.’”

If you'd like to try out Chef Todd's recipe for yourself you can check it out on Duda's website here.

Duda markets its fresh-cut celery products under its Dandy® brand. According to a press release, Dandy brand celery is available at retail and food service establishments across North America on a year round basis.

Congratulations on the award Duda!