WILMINGTON, DE - Chilean President Michelle Bachelet made her first visit to the Port of Wilmington this week during her tour of Delaware.

This event importantly marked the first time a Chilean President has visited the state, according to a press release. President Bachelet's visit comes at an important time. Just under a month has passed since the beginning of the “zero tariff” legislation pertaining to all Chilean products entering the United States. This marked the last phase of the tariff reduction schedule put into place when the United States and Chile signed the Free Trade Agreement back in June 2003. 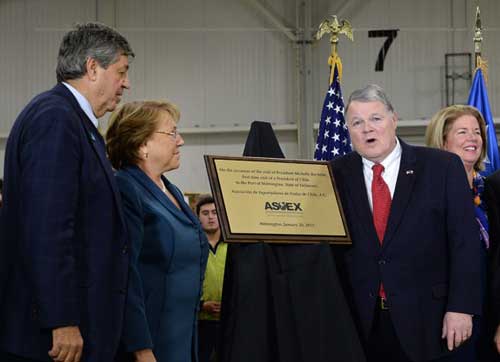 “ASOEX welcomes the opportunity to join President Bachelet on this visit,” shared ASOEX President Ronald Bown. “It highlights the work that has been done by Chile’s fresh fruit industry, in conjunction with the Government, to establish the U.S. as a key market for our fruit. The United States remains Chile’s largest market for fresh fruit exports. Last season, more than 750,000 metric tons (MT) were shipped to the U.S., with grapes, apples, blueberries, cherries, citrus and avocados the top items.”

While at Wilmington, the delegation met with Delaware Governor, Jack Markell, and members of the Greater Philadelphia Chamber of Commerce. During a public ceremony, President Bachelet displayed a plaque sponsored by ASOEX in order to symbolically mark the importance of the event.

The Port of Wilmington will be playing a key role during the current Chilean fresh fruit season. Over half of all fruit exports from Chile enter the nation through Delaware ports. In addition, roughly 16 million boxes of Chilean fruit pass specifically through the Port of Wilmington each year between November and April. With grape, blueberries, and stone fruit shipments already rolling in, this year is expected to be no different. In fact, due to favorable weather conditions, quality and volume are expected up across the board this season.

Stay tuned to AndNowUKnow as we continue to bring you the latest developments concerning the fresh produce industry.