Blue Apron Experiences Stock Surge After Partnering With Beyond Meat

NEW YORK, NY - Since last December, Blue Apron has been struggling to stay afloat as the ever-changing meal kit sector ebbs and flows. Although it hit penny-stock status at the end of last year, the company may now have a new and winning strategy. Recently, it closed a deal with Beyond Meat®, which added the company’s plant-based products to Blue Apron’s meal kits. Since that deal closed, Blue Apron saw its stock price surge by 53 percent per share on Tuesday afternoon.

According to Yahoo Finance, Blue Apron split its stock last month in an attempt to keep its stock price above $1 per share and avoid being delisted on the New York Stock Exchange. 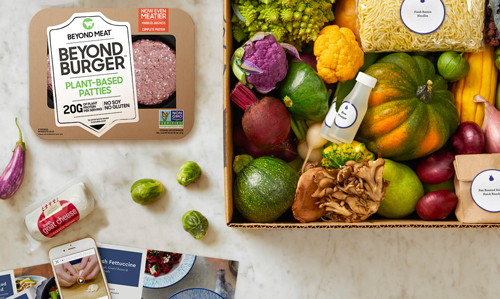 The company has endured several hardships of late. Despite its attempts to revive itself and form strategic partnerships with WW—formerly known as Weight Watchers—and Walmart-owned Jet.com, Blue Apron was forced to cancel its pilot program with Costco, and cut its workforce by four percent.

After going public in April, Beyond Meat’s market value has continued to rise, with its share price growing 582 percent since its initial public offering. The entire plant-based meat sector is booming, as according to the news source, the global market for meat substitutes is expected to hit $18.7 billion in sales by 2023.

Will this new partnership and expanded menu offerings be enough to propel Blue Apron out of penny stock misery? AndNowUKnow will report on the latest.