NEW YORK, NY - Although a heatwave is making its way through the Northwestern United States right now, a thunderstorm of tweets rained down from President Trump this Monday morning. This time around, the tweets were aimed at Amazon, and the company’s stock felt the blow, falling immediately after Trump tweeted against the e-tailer.

“The Amazon Washington Post has gone crazy against me ever since they lost the Internet Tax Case in the U.S. Supreme Court two months ago. Next up is the U.S. Post Office which they use, at a fraction of real cost, as their 'delivery boy' for a BIG percentage of their packages…” Trump began. “…In my opinion the Washington Post is nothing more than an expensive (the paper loses a fortune) lobbyist for Amazon. Is it used as protection against antitrust claims which many feel should be brought?” 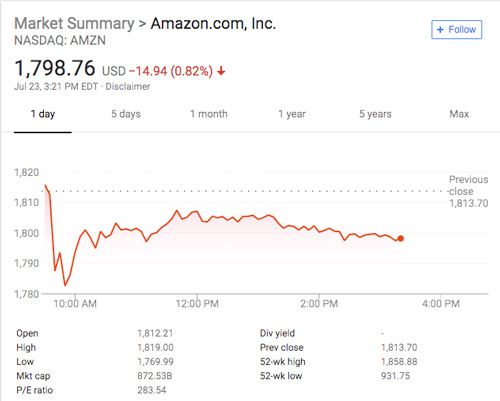 Making investors nervous were the hints to antitrust action, according to Fast Company, causing the company's stocks to dip. As a result, Amazon’s stock dropped up to 1.5 percent. While fluctuating throughout the day, the stocks did go up a little.

While this drop is indicative of Trump’s impact on the market, the news source conveys that stock prices are sure to shift as the days and weeks go by, especially considering that Amazon is set to release its quarterly earnings report later this week, the news source relayed.

How will that release affect the market? AndNowUKnow will keep you posted.